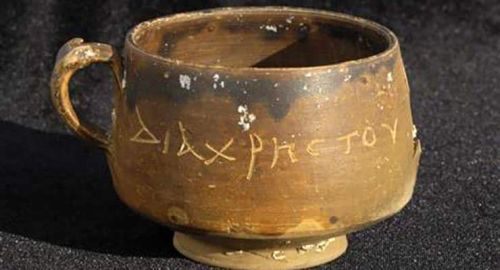 This ancient bowl discovered in the ruins of Alexandria by French archaeologists in 2008 describes the real Jesus as an occult “magician”Who was the real Jesus? In 2008, French archaeologists excavating the underwater ruins of Alexandria unearthed an bowl inscribed with a shocking clue to the identity of one of the most famous religious leaders of all time. Put simply, it referred to Jesus as a “magician.”Via NBC News:A team of scientists led by renowned French marine archaeologist Franck Goddio recently announced that they have found a bowl, dating to between the late 2nd century B.C. and the early 1st century A.D., that is engraved with what they believe could be the world’s first known reference to Christ.If the word “Christ” refers to the Biblical Jesus Christ, as is speculated, then the discovery may provide evidence that Christianity and paganism at times intertwined in the ancient world.An Ancient Relic Which Could Hold Clues to the Identity of the Real JesusThe bowl, which is dated to the period between the late 2nd century B.C. and the early 1st century A.D., reads:“DIA CHRSTOU O GOISTAIS,” which has been interpreted by the excavation team to mean either, “by Christ the magician” or, “the magician by Christ.” ............
https://ultraculture.org/blog/2015/03/05/real-jesus-magician/
(